Iceland Spar, also known as Clear Calcite or Optical Calcite, is a variety of Calcite that was originally found in Iceland. This mineral is double refractive, meaning objects appearing through it will look as though they’re in two places at once. This Calcite variety is usually completely transparent and has endless amounts of rainbow inclusions within. Iceland Spar was first reported in 1837 by J.D. Dana, but its history dates far before then. It is believed that the Vikings used this mineral as a navigator because of its light-polarizing ability, allowing them to always be able to find the sun no matter the weather. Historians believe the “sunstone” that has been commonly referred to in Medieval Icelandic texts is actually Iceland Spar. Further evidence of this is the 1592 shipwreck “Alderney”, which has been found with an Iceland Spar in it’s buried contents. These specimens are unique measuring 2″ x 1.5″ x 1″.

There are no reviews yet.

Only logged in customers who have purchased this product may leave a review. 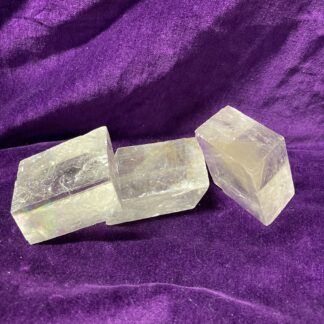